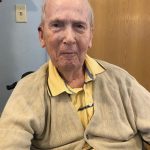 Bob graduated from East Waterloo HS and then joined the Navy as a 2nd Class Radioman.  He went to college at UNI and then onto the University of Iowa where he became a lifetime Hawkeye fan!

After his college graduation, Bob started his own record keeping business in Newton, Iowa.  He then became a successful banker in Clarence.

Bob is married to his wonderful wife, Wilma.  They have 6 children, 8 grandchildren and 4 great-grandchildren.  Bob and Wilma spent many Iowa winters at their Arizona home.

Congratulations to Mr. Bunn and thank you for your military service!

END_OF_DOCUMENT_TOKEN_TO_BE_REPLACED

Congratulations to Elizabeth Otten on being named the Clarence Senior Living August Employee of the Month! 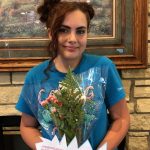